Save with a Subscription. No hassle autoshipping! 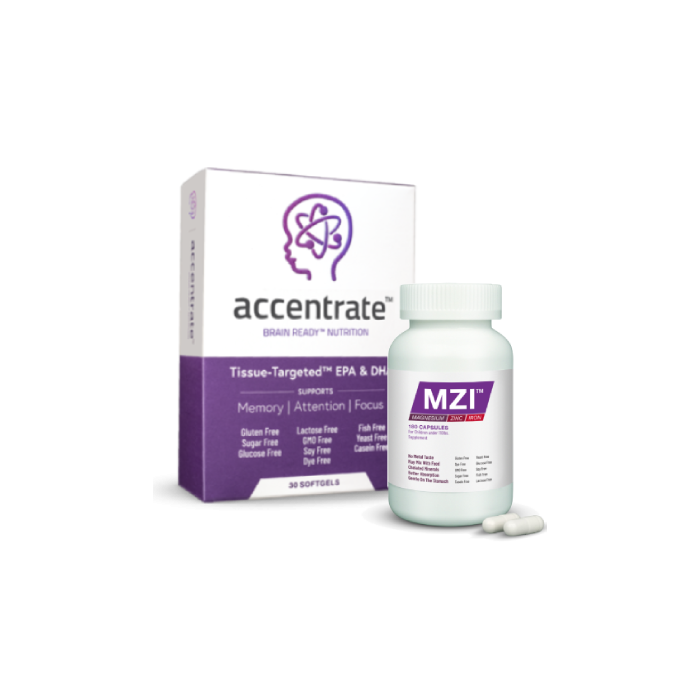 Skip to the beginning of the images gallery
Details

Get Accentrate® and MZI™ together!

Accentrate­­® is a natural, scientifically-formulated combination of minerals, lipids, and vitamins designed to address lipid imbalances associated with inattention and emotional dysregulation and support proper regulation of neurotransmitters needed for optimal cognition, including memory, attention, and focus.

It’s not a drug—Accentrate­­® is made entirely from premium natural ingredients including:

Accentrate­­®'s packaging contains a tracking system so you can easily check to make sure your child consumed their daily dosage.  If forgotten, no problem, take when remembered! Also, Accentrate® has a behavioral tracking sheet (emailed upon ordering) so you can compare behaviors from Day 1 to Day 30-90.

You can be confident in Accentrate­­®’s healthy approach to manage symptoms associated with inattention and emotional dysregulation.

MZI™ contains Magnesium, Zinc, and Iron to support proper regulation of neurotransmitters for optimum cognition, including memory, attention, and focus. The minerals in MZI™ are provided in chelated form to provide better absorption and increased bioavailability. Chelated minerals are better tolerated and less likely to promote gastrointestinal discomfort.

Zinc is an essential co-factor in over 100 enzymes many of which are used for the creation of several neurotransmitters including dopamine, norepinephrine, and serotonin. Zinc is involved in the production of hormones necessary for the regulation of dopamine.

Iron is a cofactor for enzymes necessary for the synthesis and catabolism of the monoaminergic neurotransmitters, which are strongly implicated in the etiopathophysiology of inattention and emotional dysregulation. Second, ID is associated with a decrease in dopamine transporter expression; the corresponding gene is linked to genetic vulnerability for inattention and emotional dysregulation.

More Information
Leave a Review
Write Your Own Review